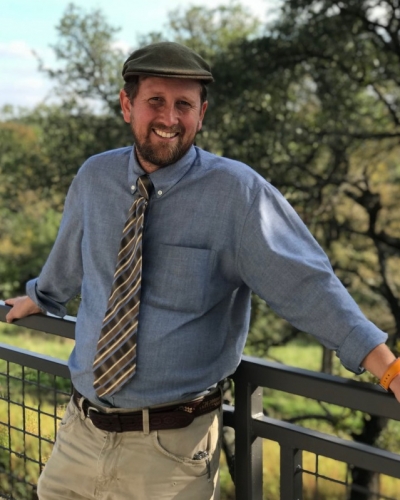 Assistant Professor of Practice, Department of Curriculum and Instruction

Mitch Ingram began his journey as an educator at the elementary level for fourteen years as a general ed., bilingual ed., and dual-language teacher for Austin Independent School District. During this time, he was awarded Teacher of the Year as well as the University of Texas at Austin's Rising Star Teacher recognition. Additionally, he has been an instructor of Conversational Spanish I, II, and III at Austin Community College while simultaneously developing a curriculum to learn Spanish and instructing at the Internal Revenue Service. He has substantial experience as an interpreter and translator, as well as conducting conferences in Cuba, Dominican Republic, Mexico, Nicaragua, and Peru.

Mitch's current research interest explores the role of humor as a form of cultural capital (navigational, resistant, resilient) as it intersects with the language of minoritized Spanish-speaking students. Mitch seeks to conduct research that acknowledges socio-historical forces while foregrounding the agency and strategies of bilingual speakers living within a culture of linguistic asymmetry. Ultimately, understanding how and why students employ affiliative/disaffiliative relajo, dichos, refranes, modismos, and chistes would aid both teacher educators and classroom teachers to foster this agency for a more equitable education and experience here in the United States.


Ph.D. in Bilingual-Bicultural Education, University of Texas at Austin, 2020

Mitch's research interests include the role of humor as a site for the mobilization of community cultural wealth, relajo in bilingual contexts and he is passionate about the different linguistic varieties, dichos, refranes, modismos, and chistes of the Spanish-speaking world. In addition, he is fascinated by how minoritized mono/bilingual Spanish-speakers leverage humor in both affiliative and disaffiliative ways to navigate the US education system and what this could mean for theory, pedagogy, and practice.

Mentor in Bridging Disciplines Program, University of Texas at Austin(2017 - 2018)

Advocate, fundraiser, and consultant for a school in Iquitos, Peru, Colegio Kairos(2010 - Present)

Spelling it Out One por Uno: Learning About Patterns in Orthography from Emergent Bilingual Spellers, National Association for Bilingual Education (NABE), Dallas, Texas (2017)

Guest Speaker on Teacher Panel: Creating a Positive Learning Environment for Minorities in Education, The University of Texas at Austin, Austin (2017)

Invited Talk for Curriculum Issues in Physical Education, The University of Texas at Austin, Austin (2016)

A que no adivinas: A look at a daily implementation and concientización of jokes and riddles used in the bilingual elementary classroom, University of Texas at Austin. Cultural Studies in Education, Austin, Texas (2015)