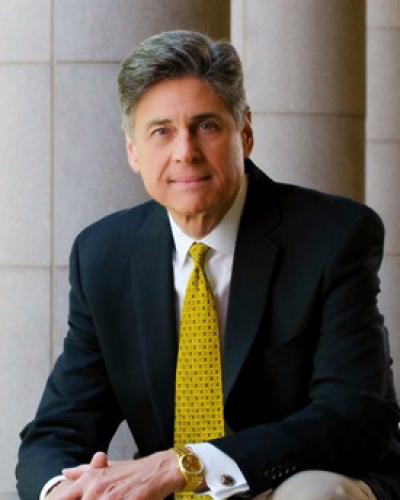 Justiz was appointed by President Reagan and confirmed by the U.S. Senate in 1982 as director of the National Institute of Education (now the Institute of Education Sciences) in Washington, D.C., where he served from 1983 to 1985 as principal spokesperson for educational research policy. While in Washington, he worked with the National Commission on Excellence in Education to produce the celebrated study A Nation at Risk, which warned of declining standards in American schools and the consequent economic dangers to society. In 1984, Justiz appointed a study group that produced The Involvement in Learning Report. The report called for greater student involvement in the learning process and recommended that institutions of higher education establish higher standards for student achievement.

From 1985 to 1989, Justiz was a chaired professor of Educational Leadership and Policies at the University of South Carolina in Columbia, and in 1988-89 he served as the Martin Luther King-Rosa Parks Distinguished Scholar-in-Residence at the University of Michigan, Ann Arbor. Prior to his Washington experience, Justiz was on the faculty at the University of New Mexico, where he directed the Latin American Programs in Education. In that role, he established the only Spanish-language Masters degree program in the nation in educational administration, and served as liaison with American embassies, the U.S. Department of State, federal agencies, and ministers of education in Latin American countries.

While dean of education at UT Austin, Justiz focused on building interdisciplinary academic and research programs across departments within the college and university, and between the College of Education and other external systems, including hospitals. He also supported an interdisciplinary approach to teacher education, resulting in a partnership with other UT colleges in the nationally acclaimed UTeach Program. Former Texas governors Bill Clements and Ann Richards appointed Justiz commissioner to the Education Commission of the States and, in October 2001, President George W. Bush appointed Justiz to the board of directors of the Federal National Mortgage Association (Fannie Mae) in Washington, D.C. He was reappointed to this board in May 2002 and again in May 2003. His appointment continued through May 2004.

Under Justiz leadership, the college consistently ranked among the best schools of education in the nation. The U.S. News & World Report national rankings (published in the 2018 edition of Americas Best Graduate Schools) placed the College of Education fourth among publics and tied for 11th overall. Over the past decade, the college was ranked number one among publics for three years in a row and among the top 10 nationally for eight years in a row.

Under Justiz, the colleges research and development expenditures increased from $2.3 million in 1990 to an all-time high of $64 million in 2012, and the college was ranked number one nationally in research funding for six years in a row. In addition, he advanced development efforts significantly during his tenure as dean, raising the colleges endowment level to a market value of over $65 million as of 2017.

Justiz also served as the senior dean (Dean of Deans) at The University of Texas at Austin for nine years. In his honor, the Foundation Advisory Council for the College of Education established a $2 million endowed chair. In 2015, Justiz celebrated his 25th anniversary as dean. On the evening of March 5, 2015, 600 members of the College of Education, the broader University of Texas community, and special guests gathered to congratulate him and to celebrate the success of the college during his tenure. To commemorate this milestone anniversary, the UT Tower was lit orange with 25 displayed to honor Dean Justiz and his contributions to the college, the university, and the State of Texas.

Justiz earned a Ph.D. in higher education administration from Southern Illinois University and a bachelor of arts degree and Master of Science degree from Emporia State University in Emporia, Kansas. Emporia State University, Texas Southmost College in Brownsville (now the University of Texas at Brownsville), and St. Leos College in Florida have conferred honorary doctorates on Justiz. Justizs areas of expertise and research interest include education and public policy; politics of education; equal access for minorities in educational systems; and Latin American programs.

Bringing the experience of 28 years as dean of the College of Education, Justiz shares his expertise in topics of public policy, the politics of education, and providing equal access for minorities in education.