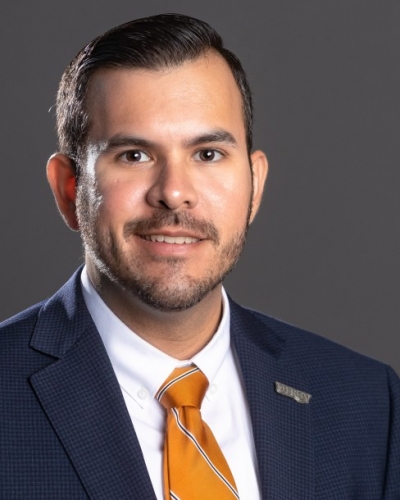 Michael Edward Aldape is a doctoral student in the inaugural cohort of the Executive Ed.D. Program in the Department of Educational Leadership and Policy Studies. He holds a Master of Arts in History, a Bachelor of Arts in History and Social Studies Education, both from the University of Texas at Brownsville, as well as a Texas Educators Certificate. During his time as a graduate and undergraduate, Michael cultivated a love of American history with a desire to see students succeed through effective teaching and mentoring. Under the tutelage of nationally recognized executive leaders in higher education, Michaels professional aspirations evolved to pursuing a career focused on post-secondary student success. To that end, he hopes to continue his work in Student Success and aspires to earn a position in executive university leadership as a Provost/Vice President for Academic Affairs and later a President.

As the current Director of Dual Credit Programming at the University of Texas Rio Grande Valley, Michael leads the universitys efforts in early college and dual credit programs. Furthermore, he has served as the PI on two long-term research and student-support grants funded by the Greater Texas Foundation focused on early college graduate transitions to and success in higher education. An advocate for colleagues as well as students, Michael has held numerous leadership positions at the university and within the University of Texas System including with the UTRGV Staff Senate, UT System Employee Advisory Council, and numerous other committees. He looks forward to leveraging his experiences in working with students, faculty, divisions across the university, and the UT System to achieve success in this program.

Juan C Gonzales (Committee Member)
Dr. Juan C. Gonzalez is Clinical Professor in the College of Education within the Program in Higher Education Leadership (PHEL). His expertise in student affairs leadership and administration, improving the college student experience, and expanding access to higher education for first-generation college students. Dr. Gonzalez served as the Vice Chancellor-Student Affairs at UC San Diego from 2014 till the end of 2017. González has served as vice president for Student Affairs at a...